Skip to content
Home » Crystal bloom in Genshin Impact: where to find, how to get, for whom, description

Crystal bloom in Genshin Impact: where to find, how to get, for whom, description 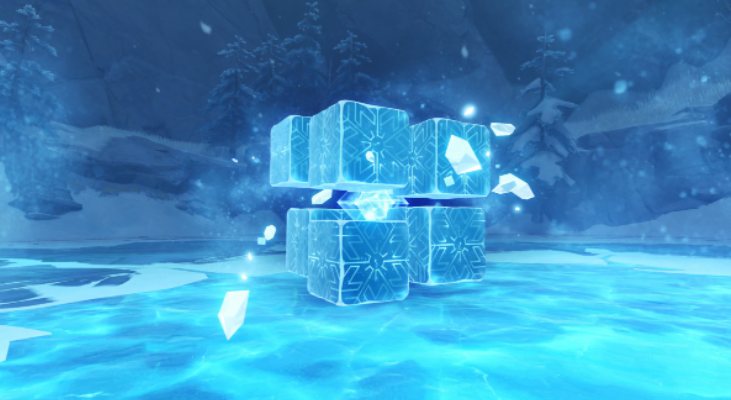 Today we’ll talk about Crystal Blossom in Genshin Impact: where to find it, how to get it, for whom, and description.

Ice crystals of amazing purity, formed in the cold color of Cryo hypostasis.
These frost crystals will never stop growing, following their icy laws, until one day the flower of winter opens and freezes everything around. Perhaps frozen time, its unmelting bosom, is the true essence of this immortal flower.‎

In Genshin impact, the crystal can be used to Ascend an Eola character.

To reach the Ascension to the complete sixth phase of the hero of Eola, you need to collect 46 of these crystals.

Where to find ice crystals

To get ice crystals, you will need to kill the boss. The component will appear with Cryo Hypostasis level 40+.

First, you will need to go through a quest called “In the mountains” because you may not find the boss if you don’t do this.

The location of Cryo hypostasis is not accessible. It is located in the Gorge of the Sleeping Dragon, the southern part. To get to the Dragonridge place, you can teleport (the port is near the arena). To get Cryo Hypostasis, you will need to get rid of the magic ice.

Externally, the boss is a transparent blue cube, inside of which you can see a glow. The weakness of Cryo hypostasis is its core, which is vulnerable after each attack. Use your Pyro or Electro skills to deal massive damage quickly. The boss takes damage if it touches the ground after being hit. Since it is icy around, freezing will occur. To make it easier for yourself, light the heaters in the arena (there are only 3 of them).

Food or items such as “Tomato Stew” and “Heat Bottle” can also warm you up.

After defeating the boss, a large flower will appear in its place. To collect it, you need to have 40 units of Primordial Resin.

Cryo Hypostasis is one of the bosses in Genshin Impact. After killing this boss, the following materials can be obtained: Precious Shivad Jade, Shivad Jade Piece, Crystal Blossom, Shivad Jade Fragment, and Shivad Jade Shard. In addition to materials from this boss, you can get artifacts from sets: Lucky, Traveling Ensemble, Gladiator’s End, Exiled, and Berserker. The boss spawn point is marked on the map below. Requires 40 Primordial Resin to receive the reward.

Thanks to Pyro Resonance, which increases attack power by 25%, Klee will be able to create the Melting elemental reaction when fighting Cryo Hypostasis quickly. Raise this stat even further by activating Bennet’s Elemental Burst. At the end of the combo, use the “ult” of the fiery shorty.

On the other hand, Zhong Li will help you protect the squad from powerful enemy attacks, especially at the last stage, when you need to destroy his barrier. If your life bar goes down, then use Bennet’s skills to heal the group.

Two Pyro heroes in a team will give a bonus to attack power. Xiang Ling will also be able to deal with additional damage from the Melt reaction. If Barbara’s healing doesn’t help much, or you get frozen a lot because of her, you can take Noelle to put shields on your characters.

Cloud grass fruit in Genshin Impact: where to find, map, why you need it
Hello, fans of Genshin Impact! Today we’ll talk about
0314

Three boxes in Genshin Impact – the Princess Box, Priest Box, and Scribe Box: where to find, how to open
Hello, fans of Genshin Impact! Today we’ll talk about
0362

Freedom-Sworn in Genshin Impact: for whom, pumping, description of weapons
Hello, fans of Genshin Impact. Today we will talk about
0336

Heavenly Majesty in Genshin Impact: how to get who suits the sword, leveling, description
Hello, fans of Genshin Impact. Today we’ll talk about
0341

Dragon Storm in Genshin Impact: how to get a spear, who suits it, description, leveling
Hello, fans of Genshin Impact. Today we’
0346