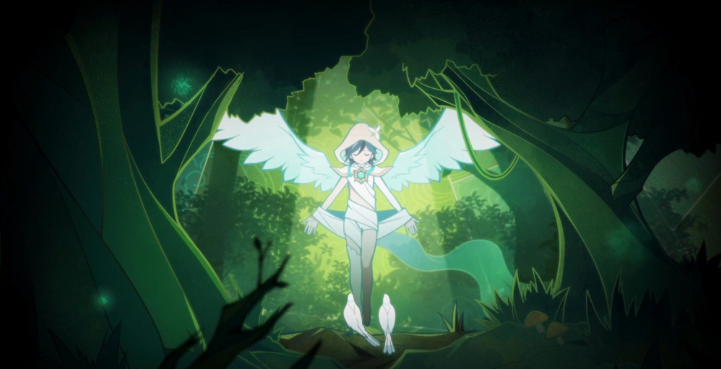 The Archons, or Gods in Genshin Impact, are beings with excellent control over elemental energy, whose lifespans are much longer than those of mortals. References and allusions to Celestia can often be found, though how this connection worked for the gods that preceded the current Seven Archons is currently unknown.

Before the War of the Archons, there were quite a few gods who inhabited and traveled the continent of Teyvat. For unknown reasons, seven divine altars opened on Celestia, causing the continent to plunge into a long series of conflicts that ended 2,000 years ago. Most of the gods were killed or sealed during the holy war until only seven victors remained. Each victor became an Archon of their element and became the ruler of one of the seven nations, using their powers to transform their territory and govern the land according to their ideals.

The Chinese text does not use a specific term for the titles of the seven archons, but in the English translation, the Chinese character (神 “god”) was translated as “archon,” regardless of whether he/she was one of the Seven Archons or not. Therefore, it is now difficult to say whether the term “archon” is a synonym for “god” or not.

The next destination for Genshin Impact players is Sumeru, the Dendro Archon’s domain. Sumeru has grown in popularity mainly because the Dendro aspect has not been fully explored.

The Traveler is hunting for their lost sibling in Genshin Impact’s overarching plot. They are seeking out each nation’s Archon, which implies Sumeru’s Dendro Archon will be introduced shortly.

Recently, a Reddit user shared new info allegedly coming from [Tangzhu_tz]. As per the given translation, the leaker states, ” The Dendro Archon has a new body model. Slightly taller than [female child] model but slightly shorter than the teen model.”

Players should note that, here, the Female child model refers to a body type similar to Klee/Sayu/Qiqi, and the Teen model is somewhat similar to Sucrose/Yanfei/Ayaka.

The Reddit user also pointed out an interesting post from the NGA, which also talked about Genshin Impact Dendro Archon’s appearance. It was stated, “The news seems to have been around since last year, but no one has dared to say so.”

They added, “Saw Lord Kusanali design (Similar to the situation Yae Miko looks like Yae Sakura). Carry a small magical staff, grey+white ish hair, three-piece of flowers on her left side of the head, clothing has a flowery pattern, the face looks like Theresa Apocalypse from HI3.”

Previously the leak of Dendro Archon’s body shape being changed to the female child was revealed by @SaveYourPrimos, which also included an image for reference.

As mentioned by @SaveYourPrimos, “Alleged!DD used the image on the right as a source for his leak; the image is not Dendro Archon’s design. He claims she continues to use the female child (Klee/Qiqi) model.”

Other than this, earlier, @UncleDD also stated that Dendro Archon would be released in the 3.1 patches along with a new female character, but this is not the only time we have heard of Dendro Archon release, as a recent Genshin leaker and Reddit user, No-Lifeguard4399 who has become quite popular recently talked about Dendro Archon’s out in the game.

It was stated, “Dendro ain’t coming with Chasm in the same patch, you all can stop coping. Maybe a patch or two later after chasm releases, but not with it.” which matches with the claim that Dendro Archon will release with a new Sumeru map and Genshin Impact 3.0 is rumored to bring Sumeru region after 2.8 updates.

According to Zhongli, Sumeru’s Archon is known as the Lesser Lord Kusanali, and she is known as the God of Wisdom. Her other name is Flower Archon, so it’ll be fascinating to see how it connects to her character.