Skip to content
Home » Pyro hypostasis in Genshin Impact: where to find, how to win, guide

Pyro hypostasis in Genshin Impact: where to find, how to win, guide 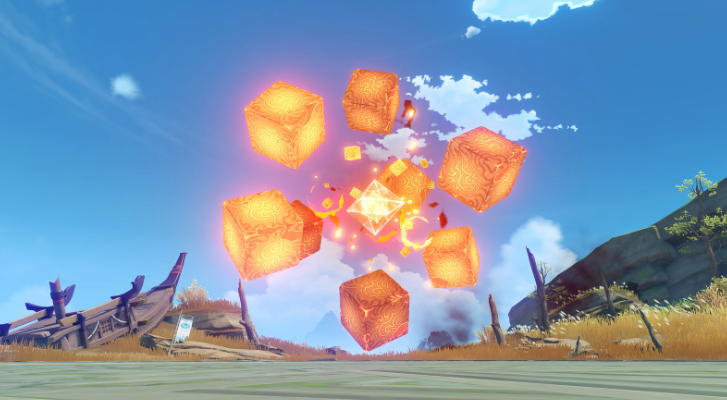 Today we will talk about Pyro Hypostasis in Genshin Impact: where to find, how to win, and guide.

How to find the Pyro hypostasis

Of course, the first thing you will need to do is get to Inazuma itself. After completing the Escape from Rito Island quest, you can immediately head to Konda Village. Then, go to Amakane Island, summon Wavewalker at the anchorage, and sail straight to the islet northwest of Kujo Camp. This is where the enemy you need is located.

Be sure to activate the teleport there so that you can then move to the boss at any time. Make sure you have 40 Elemental Resin before you fight him. Otherwise, you won’t be able to collect the reward later. We add that the respawn of Pyro Hypostasis occurs approximately 2-3 minutes after his death.

How to kill Pyro Hypostasis: strategy

The main feature of Pyro Hypostasis is that it can switch between two states:

Concentrate on paying off the boss

Pyro Hypostasis has different combat mechanics from similar monsters. It immediately ignites and envelops the entire area in flames when you approach it. You can track its status by the orange indicator located under the HP bar.

During the ignition phase, the boss does not lose health, so do not try to damage him. To extinguish it, use the elemental abilities of the heroes belonging to the Hydro element.

Deal a lot of damage in the redemption stage

When the orange bar is empty, Pyro Hypostasis will turn off. It will become vulnerable to any attacks, so try to deal as much damage to it as possible before it bursts into flames again.

When the boss loses most of his health, he will cover his core with a protective shell and leave elemental particles on the field. Your task is to destroy them so that Pyro Hypostasis does not restore HP. The correct way to destroy pyro-particles is to use any elemental abilities, except for Pyro, of course.

Use potions and food

As of Update 2.0, Pyro Hypostasis is considered one of the most challenging bosses. I was going to fight him and stock up on potions and food that increased the characteristics of the squad.

Considering the element of this boss, you should take Hydro and Cryo characters into your squad, and priority should be given to heroes with water attacks since they best break through the enemy’s fire shield when he is in the “Burning” state.

Here are some options for units that will be effective against this enemy:

When fighting this boss, Tartaglia, who can hit water attacks from afar, and Xing Qiu, who deals with constant Hydro damage thanks to his essential skill Guhua: Rain Veil, show themselves best. Therefore, with these heroes, you are unlikely to have problems with the destruction of Pyro Hypostasis.

Pyro Hypostasis transforms into a fiery fist that slams the ground and knocks the hero back, dealing damage. After hitting the ground, the fist releases several fire waves, so try to run away from it immediately.

The boss takes the form of a ball, which rapidly rolls towards the hero, turns around, and attacks again. You can avoid damage by dashing to the side.

The boss takes the form of a ball and begins to pulsate. After a while, it will explode, knocking the hero back and dealing a lot of damage. At this point, you need to run away from him. There is plenty of time for this.

Pyro Hypostasis turns into a tower, which begins to bombard the area with fiery projectiles in a circle. These projectiles not only deal damage in the fall area but also explode on impact with the ground, so run away from them.

Pyro Hypostasis unleashes three consecutive attacks – a fiery splash, an explosion, and a push. If you don’t dodge this ability, the active hero will take a lot of damage and possibly die. Therefore, be as careful as possible.

At this stage, fire zones appear on the site, circled in red. After a while, pillars will appear in the place of the puddles of fire, which will throw the hero away and inflict damage on him. To avoid injury, constantly move and run out of the circles as quickly as possible.

Having dealt with this enemy, you can pick up many valuable items. In addition to the standard adventure points, friendship experience, and pestilence, you can also get various materials necessary to elevate Pyro heroes. Here is the complete list:

Among other things, you can get a variety of sets of artifacts. Their rarity depends on the enemy’s level: