What is the best gift for lisa in Genshin Impact 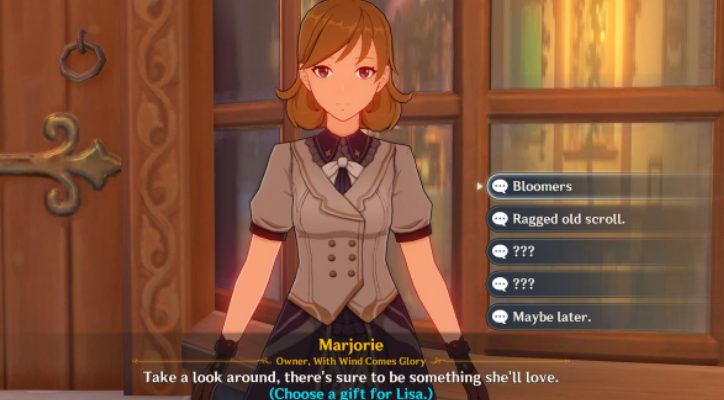 Today we will talk about the best gift for Lisa in Genshin Impact.

Lisa’s best gift and souvenir in Genshin Impact is the Ragged Old Scroll.

To get the best gift and souvenir for Lisa during the Troublesome Work quest in Genshin Impact, you’ll want to choose the Ragged Old Scroll, which is worn and torn, but over a thousand years old.

As a librarian with a love for history, this is an undeniable choice to make. And, if you make it, the witch you’re trying to impress will respond by saying:

“My my, you know a treasure when you see it. This is a work of unparallel significance for researching ancient people’s understanding of the elements. I will gladly accept it.”

Once you’ve chosen the best gift and souvenir for Lisa, you’ll want to impress her by choosing the best dish.

Lisa is a vegetarian, meaning that you’ll want to avoid choosing the steak and smoked chicken. But, there is a better option between the satisfying salad and radish veggie soup.

While she doesn’t hate the satisfying salad, the radish veggie soup is the best option as she describes it as:

“A truly exquisite dish, certainly a good fit for a witch. I am simply brimming with elemental energy after that.”

What are the best flowers for Lisa in Genshin Impact?

The best flower for Lisa in Genshin Impact is Cecilia.

You might be tempted to choose the Rose thanks to it being adorned on the witch’s hat, but Cecilia’s choice is the best flower for Lisa in Genshin Impact.

Cecilia is described as a rare beauty “only found in Mondstadt’s highest mountains,” She complements your refined taste.

However, it is noted that your choice of flowers for Lisa would have had twice the sentimental value if you chose it yourself rather than cheating by speaking to Flora.

But the choices you make don’t have any consequence.

How to complete the Troublesome Work quest

So here you are playing Genshin Impact when flirtatious mage Lisa asks you to help her track down some overdue library books. It seems like just another quest, but then suddenly, Lisa is making you buy her gifts, take her out for dinner, and she wants some flowers too? And with each of these three choices presenting a variety of options, how are you supposed to know what Lisa wants?

No judgment, friend. It’s 2020, and there’s a plaque outside, and all of a sudden acute mage is hitting on you. Maybe you’ve played some other games and think that the perfect combo of a present, dinner, and flowers might lead to “something.” So you alt-tab out, jump on Google, and here you are.

Well, guess what? It doesn’t matter what you give Lisa. No matter what items you choose, it will end the same way. Spit in her salad, even. There’s no secret romance to be had here—with the Troublesome Work quest; developer MiHoYo is just leading you on.

Some options will get you a more favorable response than others. It won’t matter in the long run—at least in terms of what’s available in the game right now—but if you want to be friendly, here’s how the quest works.

When first presented with each choice during the quest, you’ll notice that several options will be blanked out with “?????”. As the game suggests, you can discover what these hidden answers are by backing out of the conversation and talking to nearby locals—usually, the ones involved in the conversation before the choice was presented—and asking them what Lisa likes.

Or you can skip the extra busywork and let us tell you Lisa’s preferences. Here’s the correct answer for each of the three choices:

Give these items to Lisa, and you’ll be able to move on to the next part of the quest. You won’t need a guide for it, though. Just follow the markers on your map, and you’ll find the final missing library book.